Quests marked with • will indicate side quests.
Lengthy quests will have their own page.

Beginning
Defenders of Astaria
→ Report to Officer Durian in far northeastern corner of Brightwyn.
→ Speak to Seargent Thorn in Brightwyn Village to continue. 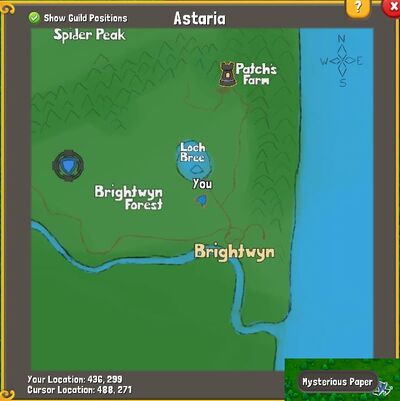 → Speak to Seargent Thorn to start.
→ Make your way to Dawn the Blacksmith and listen to what she has to say.
→ Travel north, then stray from the path. You will find a Mysterious Paper on the left. 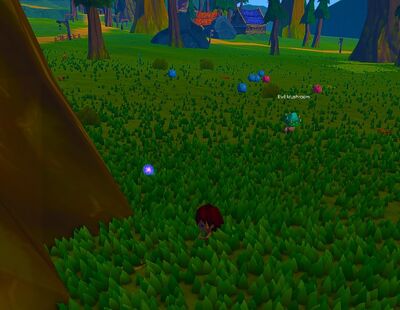 → Speak to Seargent Thorn to move on to the next quest. 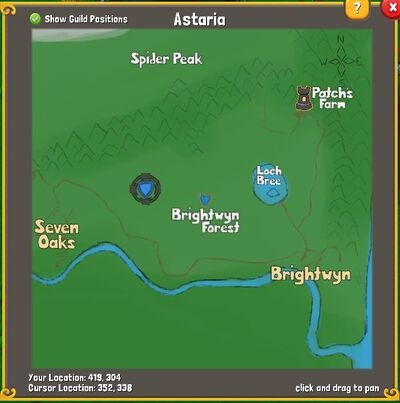 → Defeat the One-Eyed Bandit. Remember to allocate your Stat points and skill points.
→ The fake treasure is north of the camp.

Patch's Farm
i forgot what the quests were called
Gather Cabbages

→ Talk to Patch.
→ Gather 20 cabbages around their farm. Beware of scarecrows.

Defeat Scarecrows
→ Talk to Patch.
→ Defeat 10 scarecrows in the farm.

Get Patch's Alchemy Book
→ Talk to Patch.
→ Next to the fence should be a pathway. Follow it down until you reach the tree at the end of it. 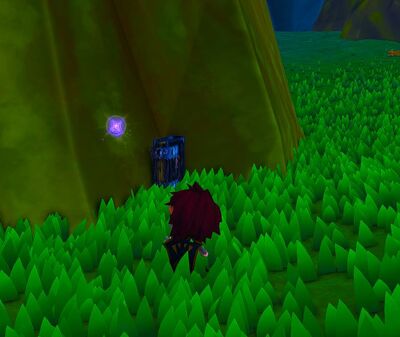 Patch's Research
→ Talk to Patch.
→ Open your map and head near the Brightwyn arena (blue shield in circle).
→ Defeat 6 Red Bats and get their wings.
→ Defeat 6 Mushrooms to get their caps.
→ Defeat the Forest Golem to get its gemstone. (Located at coordinates 401,299)

Search for the Buried Treasure:[]

Buried Treasure is located at 424,302. Note: You are looking for a bunch of "Disturbed Dirt" Patches, inspecting one of these may spawn a zombie that will attack you.

Simply talk to Patch on Patch's Farm to complete this quest.

The Ghost in Brightwyn Forest:[]

Walnut can be found wandering around Loch Bree, try searching around the Disturbed Dirt patches from earlier as that is where I managed to find him.

Walnut wishes for his remains to be returned to his wife Pecan. Pecan is located at The Nut House (411,288)

→ Go to the Tavern in Seven Oaks